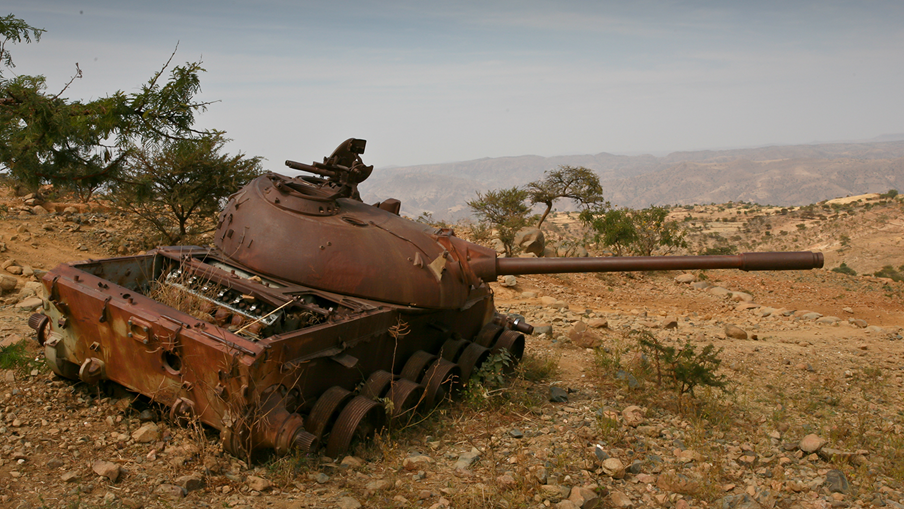 The U.S. Treasury Department on Friday sanctioned the Eritrean ruling party, its military, two officials and holding companies for their roles in the ongoing crisis in Ethiopia.

Fighting in northern Ethiopia since the conflict broke out in late 2020 has killed tens of thousands people and led to a growing humanitarian crisis that has spread beyond the Tigray region. Everyone involved has committed human rights abuses, according to a recent United Nations and Ethiopian government report. Eritrean forces are one of the parties to the war and leaders from around the world have repeatedly called for their withdrawal; their presence is an impediment to ending the fighting and increasing humanitarian access, the Treasury said.

“We condemn the continued role played by Eritrean actors who are contributing to the violence in northern Ethiopia, which has undermined the stability and integrity of the state and resulted in a humanitarian disaster,” said Andrea Gacki, director of the Treasury’s Office of Foreign Assets Control (OFAC), in a statement.

The designations announced Friday were made under an executive order President Joe Biden signed in mid-September authorizing sanctions against anyone contributing to the conflict in Ethiopia, or engaged in corruption or serious human rights abuses, or blocking aid efforts.

“These measures are not directed at the people of Eritrea, Ethiopia, or the greater Horn of Africa Region; they are calibrated to impose costs on those prolonging the crisis,” said Secretary of State Antony Blinken. “Eritrean forces should immediately withdraw from Ethiopia.”

Eritrean President Isaias Afwerki leads the People’s Front for Democracy and Justice (PFDJ), the country’s sole legal political party, and he personally oversees the command and control of the military, known as the Eritrean Defense Force (EDF), the Treasury said. Afwerki issues direct orders to EDF generals, making him ultimately responsible for the Eritrean military’s role in contributing to the crisis, according to the Treasury. Both the Eritrean political party and the military were sanctioned Friday, but Afwerki was not designated.

After months of denials, Ethiopian Prime Minister Abiy Ahmed acknowledged in March that Eritrean troops had in fact joined the conflict.

The EDF has operated in northern Ethiopia amid reports of looting, sexual assault, the killing of civilians and blocking humanitarian aid, according to the Treasury. Soldiers were observed disguised in old Ethiopian military uniforms, manning checkpoints, obstructing and occupying aid routes and threatening medical staff at one of the few remaining hospitals, the Treasury said. Gen. Filipos Woldeyohannes, the EDF chief of staff who commands the Eritrean troops operating in Tigray, was sanctioned in August due to the military’s operations there.

In addition to the Eritrean ruling party and the military, the U.S. also sanctioned Hidri Trust, a holding company for PFDJ business enterprises established in 1994. Eritrea said in a 2011 letter to the U.N. that Hidri Trust was formed to provide social safety nets to the families of martyrs killed in decades of civil war, and to aid underprivileged areas. The companies formed under the trust are local and don’t enjoy preferential treatment, according to the 2011 letter.

The Treasury issued licenses for wind-down transactions with Hidri Trust and RSTC. The designations don’t cover the firms’ majority-owned subsidiaries, nor do the measures restrict humanitarian-related transactions in the region, according to guidance from the Treasury.

Eritrea manages an offshore financial system, controlled by elements of the ruling party and its supporters, to generate revenue, according to a 2014 U.N. report. The PFDJ had engaged in the practice for years, with opaque entities spread across several jurisdictions that the ruling party and government officials use to channel funds worldwide, the report said.

For his part, Ghebrehiwet “established complex financial structures of offshore companies,” allowing Eritrea to conceal its identity in jurisdictions that promote secrecy, the U.N. report said, citing numerous sources with first-hand knowledge. He was also cited in the report as the primary financial coordinator of currency operations relating to Eritrean procurement activity.

RSTC manages the PFDJ’s property and financial interests, and acts as a funder and provides business assistance, according to the Treasury. The company was originally established as a covert finance operation known as “09” that traded throughout Africa and the Middle East to raise finance for the Eritrean liberation struggle, according to a 2011 U.N. report.

“Today’s designations demonstrate that the U.S. will use all appropriate tools at our disposal to impose tangible costs on those prolonging the conflict and to promote an immediate end to the violence. These designations build upon the U.S.’ previous actions to press the parties to move toward a cessation of hostilities and a peaceful resolution to the conflict,” Blinken said.