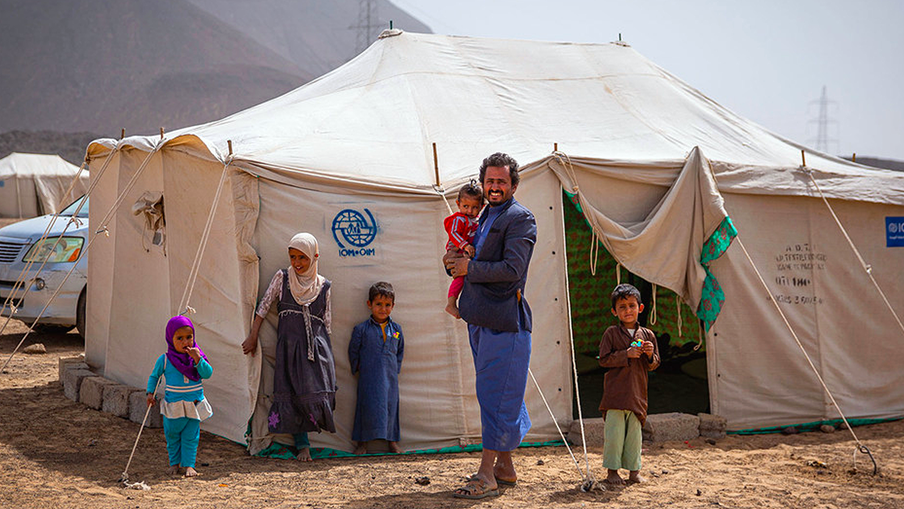 A family stands outside their tent in a displacement site outside Marib City, Yemen. (Source: United Nations)

What happened: The U.S. last week sanctioned two senior military leaders of the Houthis, a rebel group in Yemen backed by Iran, over offensives in Marib province and its surrounding oil fields that are exacerbating the country’s ongoing humanitarian crisis.

Using ballistic missiles, explosives, naval mines and unmanned aerial vehicles (UAVs), the Houthis continue to wage a war against the internationally recognized Yemeni government, the U.S. Treasury Department said. The Iranian support, through funding, training and military equipment, has also allowed the Houthis to threaten Yemen’s neighbors and conduct attacks damaging civilian infrastructure in Yemen and Saudi Arabia, according to the Treasury.

Why it’s important: Ties between Iran and the Houthis are growing more apparent, according to a recent investigation by a United Nations panel of experts, which cited evidence of weapons or components shipments, as well as seizures of arms made in Iran.

The recent designations were announced about two weeks after a joint U.S. Navy and Coast Guard team seized a massive haul of thousands of weapons aboard a vessel in the North Arabian Sea. The seized weapons included Russian-made anti-tank guided missiles, Chinese assault rifles, machine guns and rocket-propelled grenade launchers, according to a statement by the U.S. Navy. The source and destination of the materiel, found aboard a stateless dhow, was under investigation, the U.S. Navy statement said, but the location of the seizure and the weapons found follow a pattern seen in prior investigations into Iranian arms shipments to the Houthis.

Tim Lenderking, the U.S. special envoy for Yemen, criticized the Houthis on the day of the sanctions designations for their failure to engage in a diplomatic solution to the conflict. The Houthis tend to show constructive engagement on occasion, but then backtrack on the terms to which they agreed, Lenderking said during a media briefing. “There won’t be a peace deal without strong Houthi support ... but there have to be willing partners on all sides to engage,” he said.

Humanitarian crisis: The U.S., U.N. and other governments, as well as non-governmental organizations, have warned that the offensive in Marib is contributing to a tipping point in the crisis, as it puts about 1 million internally displaced people at risk and is triggering a broader escalation of the ongoing war, which is causing widespread suffering, according to the Treasury. The U.N. has called Yemen one of the world’s worst current humanitarian disasters. The Marib offensive may have tapered off recently amid heavy casualties among the Houthis, defections and resistance from Yemen’s army and allied tribesmen, local media reported.

The sanctioned: Muhammad Abd Al-Karim al-Ghamari, who was sanctioned by the Treasury under an executive authority specifically concerning Yemen, recently took charge of the Houthi offensive against government-held territory in Marib province, replacing Abdul Khaleq al Houthi, the brother of Houthi leader Abdul Malik al Houthi. Yusuf al-Madani, who was designated by the U.S. State Department as a global terrorist, commands forces in Al Hudaydah, Hajjah, Al Mahwit, and Raymah, Yemen, but as of this year was assigned to the offensive targeting Marib.

Mohammed Ali al-Houthi, head of the Houthis’ Supreme Revolutionary Committee, a body established after the Houthis dissolved the country’s parliament, had dismissed the latest sanctions and threatened further attacks “in some aggressor countries,” according to a Reuters report on Sunday that cited a social media post.

Al-Madani was the son-in-law of Hussein Badreddin al-Houthi, the deceased founder of the Houthi Movement, according to the U.N. Al-Madani has also served as the "main contact" between the Houthis and Hizballah and the Islamic Revolutionary Guard Corps (IRGC), U.S.-designated foreign terrorist organizations (FTOs), regional media reported.

The Saudi Arabia-led military coalition fighting on behalf of the Yemeni government killed a high-ranking Hizballah commander in an airstrike in Marib, highlighting the level of Iranian involvement in the conflict, the Yemeni information minister told The National on Tuesday.

Al-Ghamari, serving as the most senior commander within the Houthi military leadership structure, is responsible for overseeing operations that have targeted Yemen’s neighbors, including UAV and missile attacks against Saudi Arabian targets, the Treasury said. He also directs the procurement and deployment of weapons, including improvised explosive devices, ammunition, and UAVs, and received training in Houthi camps run by Hizballah and the IRGC, the Treasury said.

Al-Ghamari participated in Houthi attacks on Saada and in the 2014 capture of the Yemeni capital, Sana’a, and a year later was appointed as head of the Houthi-controlled Supreme Revolutionary Committee and Houthi supervisor in Hajjah governorate, the Treasury said.

The Biden administration revoked an FTO designation of the Houthis weeks after taking office, citing the dire humanitarian situation on the ground. The FTO listing had gone into effect during the final full day of the Trump administration. The U.S. has also sanctioned a number of Houthi security and intelligence officials, as well as Iran’s official envoy to the group, Kharon reported.