The U.S. sanctioned multiple businessmen tied to the Belarusian leader, and their corporate networks 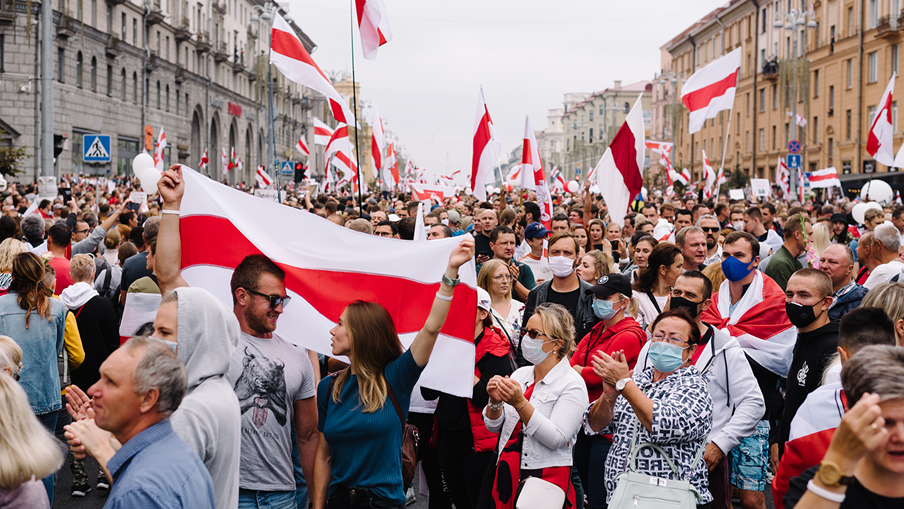 President Joe Biden on Monday signed an executive order expanding the scope of sanctions on Belarus, and the U.S. designated dozens of individuals and entities, including the national Olympic committee, two state-owned enterprises and three “wallets” of the Belarusian leader.

The U.S. measures come on the anniversary of a Belarusian presidential election marred by fraud allegations in which President Alyaksandr Lukashenka claimed victory and held a secret inauguration. The government has stifled dissent since then. Lukashenka himself has been sanctioned by the U.S. since 2006; the U.S. has raised the pressure in the past year.

“From detaining thousands of peaceful protesters, to imprisoning more than 500 activists, civil society leaders, and journalists as political prisoners, to forcing the diversion of an international flight in an affront to global norms, the actions of the Lukashenka regime are an illegitimate effort to hold on to power at any price,” Biden said in a statement.

During a marathon press conference on Monday, Lukashenka denied that his government had engaged in repression since the election. Lukashenka has ruled Belarus since 1994 and has been referred to as Europe’s last dictator.

The U.S. executive order widens the available powers to sanction players in key sectors of the Belarusian economy, including the defense, security, energy, potassium chloride (potash), tobacco products, construction and transportation industries, the White House said in a fact sheet. Sanctions only come into force once a company is listed by name, however, according to guidance from the U.S. Treasury Department.

It comes as part of a coordinated effort with the U.K. and Canada, each of which announced new trade restrictions. The European Union restricted trade with key Belarusian sectors in June. The U.K. also sanctioned Mikhail Gutseriev, a Russian businessman with longstanding ties to Lukashenka who was designated by the EU in June. For its part, the EU said it “stands ready” to consider further measures in light of Belarus’s behavior over the past year.

“Democratic countries are strongest when we stand together,” the White House said.

Following the executive order, the Treasury announced it had sanctioned 23 individuals and 21 entities for their roles in the crackdown on peaceful protests; the forced landing of a civilian aircraft and detainment of a journalist; or who profit from or sustain Lukashenka’s rule.

Among those sanctioned Monday was the National Olympic Committee of the Republic of Belarus (Belarusian NOC), which serves as a tool for Lukashenka and his inner circle to launder funds and evade sanctions, the Treasury said.

Until February, Lukashenka himself led the Olympic committee, but control then went to his oldest son, Viktar Lukashenka, who was also sanctioned by the U.S. in 2006, the Treasury said. Both were banned from the 2020 Games held in Tokyo, Japan, after they were suspended by the International Olympic Committee (IOC) for failing to protect protesting athletes.

The designation also comes after Belarusian sprinter Krystsina Tsimanouskaya resisted being sent home from Tokyo against her will following criticism of her coaches; she received a Polish visa and flew there via Vienna, Austria. Her coaches were also removed by the IOC. Tsimanouskaya was “manipulated,” Lukashenka said during his marathon press conference.

Also Monday, the U.S. sanctioned Belaruskali OAO, one of the world’s largest producers of potash, a key ingredient in fertilizer. The firm serves as a major source of revenue for the Lukashenka government, the Treasury said. The U.S. gave companies and individuals 120 days to wind down transactions with the massive firm or any of its majority owned subsidiaries.

Grodno Tobacco Factory Neman (GTF Neman), a Belarusian state-owned tobacco company, was also sanctioned. Made cheaply, GTF Neman smokes are a major source of illicit cigarettes in the EU as part of the contraband tobacco trade, the Treasury said. It also makes cigarettes under license for British American Tobacco, which has led to protests outside BAT’s offices, according to media reports.

In addition, the Treasury imposed sanctions on individuals and entities identified as “wallets” for Lukashenka, providing him with funds for personal enrichment and financing his government. The wallets receive preferential treatment in the form of monopolies, tax breaks, favorable contracts and other mechanisms, often codified by presidential decree, the Treasury said.

Two of the three wallets named Monday -- Mikalai Varabei and Aleksey Oleksin -- have been sanctioned by the EU. Varabei has also been sanctioned by the U.K. and Canada; he significantly restructured his assets after the EU designation, Kharon reported in February. Oleksin and his wife had held a stake in LLC Synesis, a Belarusian facial recognition technology company, prior to its reorganization following EU sanctions late last year, Kharon found.

The third wallet, a construction empire led by Serbian and Cypriot national Nebojsa Karic, has received gifts of state land plots in Minsk through presidential decrees, including USD 800 million worth of land for a single project, according to the Treasury.

Dana Holdings Limited, a Cyprus-registered firm with connections to the Karic family, was sanctioned Monday by the U.S. and in December 2020 by the EU. The firm rose to prominence bankrolling the rule of Slobodan Milosevic in the 1990s, the Treasury said.

Lukashenka’s daughter-in-law has a high-ranking position at Dana Holdings, the EU said at the time. The company houses her art gallery in a Minsk shopping mall, the Treasury said. The company also offered employees a day off to participate in a pro-Lukashenka rally after the August 2020 election and has appeared on pro-Lukashenka fliers, according to the Treasury.

Days before the EU sanctions, Dana Holdings was removed as the owner of three property development subsidiaries in Minsk and replaced with a United Arab Emirates-based firm, the Organized Crime and Corruption Reporting Project (OCCRP) reported in May.

The company’s former subsidiaries received numerous privileges for construction projects in and around Minsk, reaping disproportionate profits and praise from Lukashenka despite underdelivering on grandiose plans, according to the Treasury.

“We stand with the people of Belarus and will continue to use every tool available, including the new sanctions authority the President signed [Monday], to hold the Lukashenka regime to account for its human rights abuses, corruption and attacks on democracy,” said Treasury Secretary Janet Yellen.