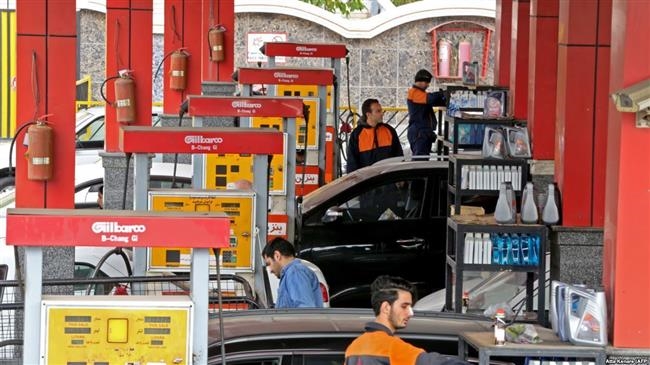 Iranians fill up their gas tanks at a gas station in Tehran. (Source: PressTV)

Iran late Thursday announced that it would raise fuel prices, which were highly subsidized, as the country’s economy struggles amid U.S. sanctions and heightened inflation.

The state-owned National Iranian Oil Products Distribution Company (NIOPDC) said standard vehicles are subject to a subsidized monthly ration of 60 liters at 15,000 rials (USD 0.36) per liter, an increase from the original rate of 10,000 rials per liter, effective Friday at midnight. Additional gas purchases beyond the rationed amount will cost 30,000 rials per liter. Rations will be stored on personal fuel cards, officials said.

Domestic fuel consumption is about 87 million liters daily. The NIOPDC announcement was met by protests in major Iranian cities, including Shiraz and Mashhad.

Revenue raised from the price hike would be used to fund additional subsidies for 18 million families, or about 60 million people, said Mohammad Baqer Nobakht, the head of Iran’s Plan and Budget Organization (PBO). The Iranian government has no intention of receiving any of the revenue despite the country’s economic woes, said Iranian President Hassan Rouhani.

Iran’s economy has struggled in the 18 months since the U.S. withdrew from the nuclear deal and phased in sanctions as part of a “maximum pressure” campaign. The Iranian economy is expected to shrink by 9.5 percent this year, according to estimates released in October by the International Monetary Fund. Iran has taken several steps to back away from compliance with its side of the nuclear agreement.

Inflation has also spiked, due in part to U.S. sanctions, and many fear the fuel-price increase will also lead to a jump in the prices of other basic goods.

Iran boasts some of the world’s largest oil and gas reserves, and Rouhani said this week that the country discovered a new oil field with 53 billion barrels of crude.

Nevertheless, Iran has seen a tenfold decrease in oil exports and sales since the U.S. withdrawal, and has sold its fuel through non-traditional methods, including an online energy exchange, which on Monday recorded its largest sale yet of 60,000 tons of liquified petroleum gas (LPG) for USD 23 million. Millions of barrels of oil aboard the Adrian Darya 1, a sanctioned Iranian oil tanker, was delivered to Syria through a series of clandestine ship-to-ship transfers, according to a report in The National, citing data from Tanker Trackers.

The Iranian government has also struggled to combat widespread fuel smuggling to neighboring countries: a state news outlet reported in May that 20 million liters of gasoline per day were smuggled abroad, equivalent to 23 percent of the country’s daily consumption.

A member of the Iranian Parliament’s Energy Commission in October said that energy prices would not be raised before the end of the year (the Iranian calendar ends in March), because “the country should have a stable foundation and societal condition” prior to any such action. A 2007 increase during the presidency of Mahmoud Ahmadinejad led to rioting across the country, during which at least 12 gas stations in the capital of Tehran were set on fire.

Schools in Tehran were closed on Wednesday due to dangerously high levels of pollution in the capital and surrounding suburbs. Tehran’s air quality index is lower than that of other Asian metropolises like Beijing or New Delhi, and it is made worse by the quality of domestic gasoline, which remains below the Euro-6 standard.

Samuel Rubenfeld contributed to this report.