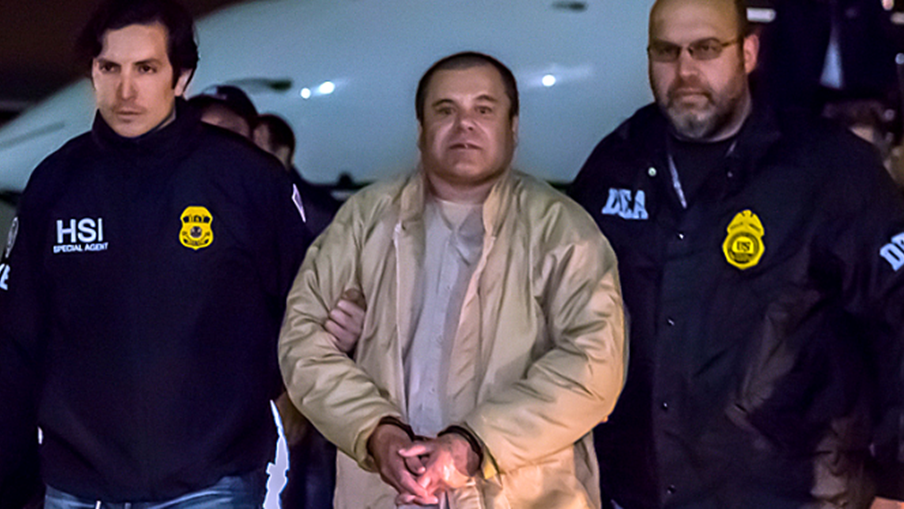 Guzman was extradited from Mexico to the U.S. in 2017. (Photo: U.S. Immigration and Customs Enforcement)

This article has been updated with additional research by Kharon.

Joaquin Guzman Loera, the Mexican drug kingpin known as El Chapo, was sentenced Wednesday in a U.S. federal court to life in prison, plus 30 years.

In addition to the life sentence, Guzman was ordered to pay $12.6 billion in forfeiture. Guzman was convicted in February on drug, murder and money laundering charges. He led the Sinaloa Cartel and has been sanctioned under the Kingpin Act since 2001; the cartel was designated in 2009. The U.S. has repeatedly sanctioned people and entities tied to the cartel.

The monthslong trial revealed Guzman’s role in, and the inner workings of, the Sinaloa Cartel. Evidence presented at the trial included testimony from more than a dozen cooperating witnesses; seizures of more than 130,000 kilograms of cocaine and heroin; weapons, including a rocket-propelled grenade launcher; text messages and videos, prosecutors said. The case also unearthed grisly tales of widespread bribery, a naked escape from a raid by Mexican marines and Guzman burying a man alive, according to media reports. The convictions, on all 10 counts he faced, followed more than a week of jury deliberation.

“The long road that brought ‘El Chapo’ Guzman Loera to a United States courtroom is lined with drugs, death and destruction, but ends today with justice,” said Assistant Attorney General Brian A. Benczkowski of the Justice Department’s Criminal Division.

Guzman spoke before his sentencing, according to media reports, saying he hadn’t received a fair trial and decrying his treatment in U.S. prison as torture. “Since the government of the United States is going to send me to a prison where my name will never be heard again, I take advantage of this opportunity to say there was no justice here,” he was quoted as saying.

A final witness confronted Guzman at the sentencing, saying Guzman had paid a group of Hells Angels $1 million to assassinate her, according to a New York Times report. An informant for years, she performed dirty tricks on Guzman’s behalf and worked as an assistant to one of Guzman’s lieutenants, a Colombian trafficker who turned government witness, the report said.

Guzman has arrived at the most secure U.S. prison, located in Colorado; he escaped twice from Mexican prisons before he was captured and extradited in January 2017 to the U.S to face charges.

Mexican officials and locals in his home state reacted to the sentencing as well. President Andres Manuel Lopez Obrador called the life sentence “inhumane,” and Sinaloa residents said he should be serving his time back home.

Lopez Obrador said the Mexican government will claim any property confiscated to fulfill the $12.6 million forfeiture order. Santiago Nieto, the head of Mexico’s financial intelligence unit (FIU), said his office is working with U.S. authorities to track down accounts linked to Guzman.

Analysts on the Latin America team contributed to this report.