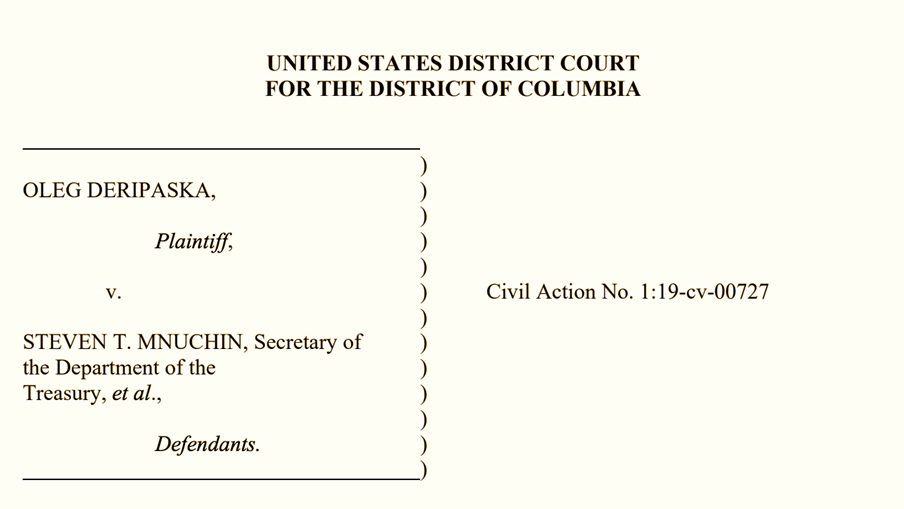 The U.S. Treasury Department disclosed last week in court filings the basis and sourcing for its sanctions on Russian billionaire Oleg Deripaska, providing a rare glimpse into the evidence for a designation.

Treasury’s Office of Foreign Assets Control (OFAC) used a variety of evidence, ranging from public statements and records to classified intelligence to establish a reasonable basis for its case that Deripaska engaged in sanctionable conduct.

Deripaska acted in support of Russian President Vladimir Putin’s projects on behalf of Russia’s interests and operates in the country’s energy sector, according to Treasury’s public designation statement in April 2018. He sued the Treasury in March seeking removal from the U.S. sanctions list, saying in interviews that the sanctions were based on “filthy lies.”

Replying last Tuesday to the lawsuit, the Treasury supplied to the Washington, D.C. federal district court a 161-page evidentiary memorandum providing a basis for the sanctions, with redactions that presumably contain classified information.

The memo lays out the basis for the designation by citing media reports from as far back as 2008, printouts from Deripaska’s website, a company prospectus and other public records. There are 29 exhibits of evidence cited in the memo, eight of which are redacted, according to a Kharon review of the memo. As the redacted exhibits represent approximately 30 additional pages, much of the information is unknown. One other exhibit — a New York State court record in which Deripaska said he has a Russian diplomatic passport — contains partial redactions.

A sanctioned actor can challenge the designation through an administrative process; the Treasury requires proof of a change of behavior, or other factors such as death or mistaken identity, before removal. Sanctions attorneys have historically said the process of gaining a delisting for their clients can be frustrating, though OFAC issued guidance in 2017 to make it more clear.

Deripaska called the memo “a poorly researched report riddled with false statements and factual inaccuracies” in a statement posted to his personal website. “Overall, OFAC’s report didn’t produce any evidence for its tired old and false claims. It provides distorted interpretations of publicly available materials published on corporate websites and in the media,” he said.

The Kremlin also responded to the release of the memo, saying Deripaska has always acted in the interests of his business, and that Putin has never used private business “to promote any state interests,” according to a report by RBC.

The effort by Deripaska for his own removal follows his recent success in the delisting of companies that he had controlled. En+ Group PLC, a London-listed holding company, was removed from the sanctions list in January, along with two firms it controls — aluminum giant United Co. RUSAL PLC and power company JSC EuroSibEnergo. They were removed after Deripaska agreed to lower his stake and control in En+, and to a governance overhaul that included putting Americans and Europeans on the board of directors. The Treasury had stressed, in the face of Congressional inquiries, that Deripaska remained sanctioned despite the delisting of the firms.

Deripaska has sought similar treatment, and a similar process, for GAZ Group, a commercial vehicle producer, saying the company could go under if it isn’t delisted.

Megi Hakobjanyan contributed to this report.