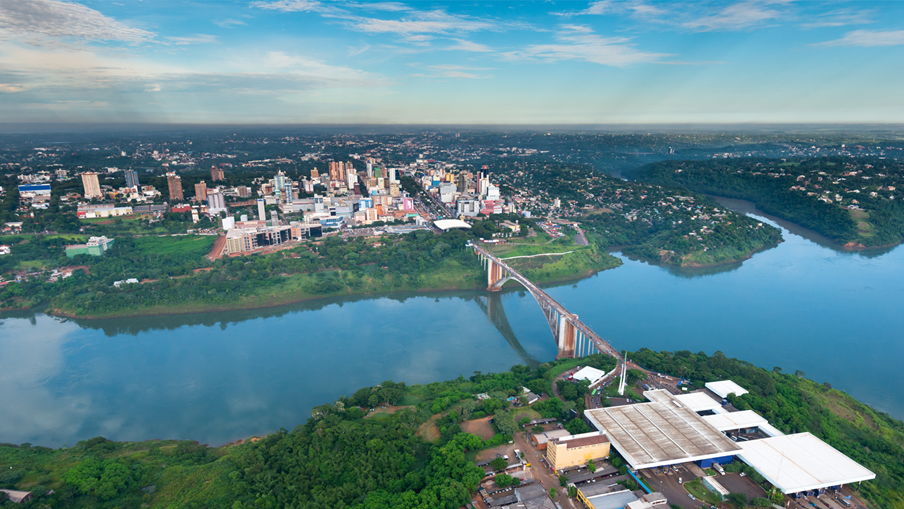 An aerial view of the Paraguayan city of Ciudad del Este and Friendship Bridge, which connects Paraguay and Brazil. (Source: Adobe Stock)

As Paraguayan anti-drug authorities announced the arrest of a man operating in a largely lawless border area, the U.S. Treasury Department placed sanctions on him, two associates and five companies connected to them.

Kassem Mohamad Hijazi, a Brazilian citizen of Lebanese descent, was detained Aug. 24 in Ciudad del Este as he faces charges of money laundering and drug trafficking, Paraguayan authorities said. He was transferred to the capital, Asuncion, where he will await extradition to the U.S., according to media reports.

“It is the culmination of a year’s intelligence work that we managed to arrest this person,” said Zully Rolon, the head of Paraguay’s National Anti-Drug Secretariat (SENAD), according to a report by Latin American media outlet Infobae.

His capture coincided with the onsite visit of officials from the Financial Action Task Force (FATF), an anti-money laundering and counter-terrorist finance (AML/CFT) standards-setting body. It was a coincidence, a Paraguayan official said, according to a report by UltimaHora.

Hijazi commands and controls a money laundering organization based out of Ciudad del Este that operates on a global scale with the capacity to move hundreds of millions of dollars, the Treasury said. He maintains strong ties with Paraguayan politicians, police officers, district attorneys and money exchange brokers based there who, together, have allowed him to operate in the area since at least 2018, according to the Treasury. He also maintains connections to government officials to avoid law enforcement action, and he commands a unit of plainclothes officers to carry out activities for him in exchange for monthly compensation, the Treasury said.

Hijazi is known as a despachante, or dispatcher, who is skilled at navigating bureaucracies to aid in his illicit activity, according to the Treasury. He uses import and export companies to bring U.S. merchandise in through Paraguayan ports, he then moves the profits through currency exchange offices and banks in Ciudad del Este to send the funds abroad, the Treasury said. Hijazi’s network of front companies allow him to move illicit proceeds across the globe with ease, with a network extending to the U.S., Europe, the Middle East and China, according to the Treasury.

Ciudad del Este is a city in the Tri-Border Area (TBA), a region where Paragua, Argentina and Brazil converge, that has long been known for its lawlessness: Money laundering in the TBA averaged USD 12 billion a year in 2001, according to a Library of Congress report. Illicit economies in the TBA amount to “tens of billions” in U.S. dollars per year, Interpol said in 2019 when announcing an operation in the region.

“The United States is committed to supporting Paraguay’s efforts to combat corruption and promote accountability for those who undermine government institutions,” Secretary of State Antony Blinken said in a statement about the sanctions designations.

Hijazi has a lengthy history as an operator in the TBA, Kharon found. His case is the “tip of the iceberg” in the region, according to a report by ABC, a Paraguayan media outlet.

As part of a tax-evasion case in Paraguay, he had faced accusations in the mid-2000s of ties to Hizballah, the U.S.-sanctioned Lebanese militant group, though he denied them in an interview at the time with the BBC. He was acquitted in 2008 despite strong evidence, a lawyer who worked on the case recently told a Paraguayan radio station. Hizballah raises about USD 200 million per year through the TBA and at times has transferred funds using Paraguayan financial institutions, according to the Counter Extremism Project, a research and advocacy group.

A Paraguayan intelligence document cited in a 2009 RAND Corporation report had said Hijazi, identified as the biggest money launderer in the TBA, remitted USD 32 million per month to Iquique, Chile. The figure represented four-fifths of the money transfers going from the TBA to a Chilean free-trade zone. Hijazi’s clients’ funds were said to come from “an array of illegal activities” and he had allegedly laundered money “through an impressive variety of schemes,” according to the RAND report.

In an example cited by the Treasury, Hijazi used a firm called Espana Informatica S.A. to coordinate with U.S. and China-based suppliers to import electronic equipment to Paraguay. He had worked with a company based in Florida for shipments, for which he altered invoices and submitted them to a Paraguayan bank for a wire-transfer payment back to the U.S. firm, according to the Treasury. The altered invoices reduced the value of the goods to avoid taxes and enabled Hijazi to launder the profits, the Treasury said.

Khalil Ahmad Hijazi was Espana Informatica’s president, and he and the company were sanctioned, along with another three firms he owned or controlled, the Treasury said.

Liz Paola Doldan Gonzalez, an associate of Hijazi’s in the TBA, was also identified as an intermediary who works with shipments from the U.S.; intermediaries pay bribes to process imports and exports through customs, the Treasury said, citing a 2008-2009 directive that formalized the system to ensure every official was paid.

Doldan and her network were the targets of Paraguayan anti-corruption prosecutors in July 2019 as part of “Operation Phone Call,” the Treasury said. Authorities had conducted 15 simultaneous raids to dismantle a scheme in which high-end electronics were imported from the U.S. and undervalued in tax declarations to evade duties, according to the Treasury.

Prosecutors have until December to decide on how to move forward with the case, Paraguayan outlet ABC reported.

Doldan had used her company, Paraguay-based Mobile Zone International Import-Export S.R.L., to buy goods from a Miami firm that would send the items to shell companies in Paraguay, according to the Treasury, which sanctioned her and the firm. As the goods would enter the country, Paraguayan Customs identified them as cheaper items to help Mobile Zone pay less in taxes, a scheme that generated at least USD 675 million, the Treasury said. The supplier was Mz Electronics, another firm linked to Doldan, according to an UltimaHora report.