The European Union this week sanctioned some of Russia’s wealthiest businessmen, some of whom have had ties to Putin for decades 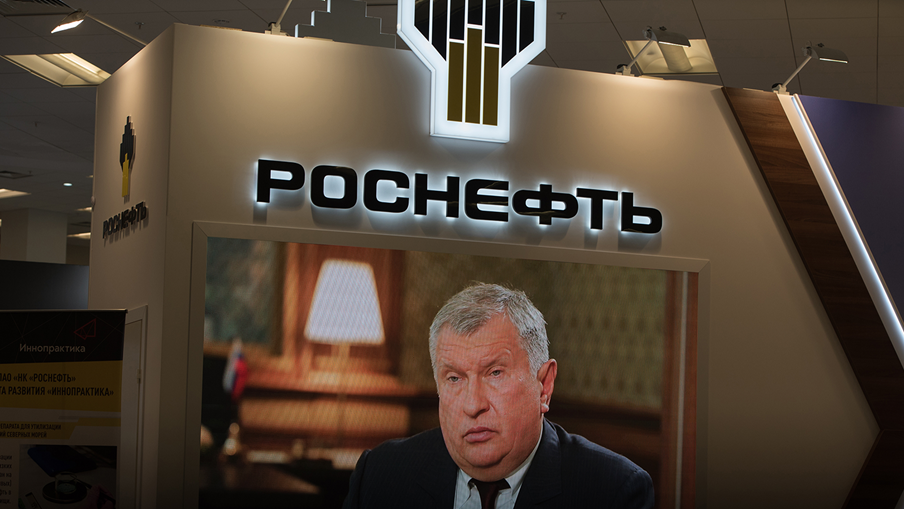 Rosneft chief executive Igor Sechin is seen on the monitor at a 2019 conference. (Source: Shutterstock)

Elite Russian businessmen were designated Monday by the European Union, another move by Western allies to tighten sanctions in response to the Russian invasion of Ukraine.

The EU sanctioned 26 people overall, including businessmen active in the oil, banking and finance sectors, as well as government officials, military leaders and propagandists. The U.S., U.K. and Canada have also sanctioned a number of Russian elites in recent days.

Though the sanctions imposed by the EU, U.S. and U.K. are coordinated and complementary, “they differ in certain respects in both scope and the timeline for full implementation,” the law firm Sullivan & Cromwell LLP said in a 28-page memorandum issued this week to clients. Given the rapid pace of events, the memo could quickly become outdated, the firm warned.

Some of the businessmen sanctioned Monday by the EU have decades-long ties to Russian President Vladimir Putin, the designation criteria document noted, including Rosneft chief executive Igor Sechin, who the bloc cited as one of Putin’s most trusted and closest advisers.

“These sanctions will expose the wealth of Putin’s elite. Those who enable the invasion of Ukraine will pay a price for their action,” said Josep Borell, the EU high representative for foreign affairs and security policy, in a statement.

Russia’s wealthiest have lost a combined USD 83 billion this year, according to figures from the Bloomberg Billionaires Index released this week. The latest EU designations come as part of the broad Western response to the Russian invasion of Ukraine.  Sanctions and other Western restrictive measures have contributed to a Russian market crash, Kharon reported on Monday.

Sechin has been sanctioned by the U.S. since 2014 and is listed by Canada. Sechin worked with Putin in the St. Petersburg mayor’s office in the 1990s and has proved his loyalty ever since, according to the EU, which noted he is considered to be one of the most powerful members of the Russian political elite, receiving benefits for his subordination. He has received important and difficult tasks from Putin and was rewarded with great wealth and leadership atop Rosneft, one of the world’s largest crude oil producers, the EU said.

Rosneft, for its part, has not been spared from the fallout of the invasion of Ukraine: British oil giant BP PLC said Sunday it would exit its 19.75 percent stake in the company and announced that its members of the Rosneft board would leave their directorship roles. Rosneft is subject to U.S. restrictions covering the Russian energy sector, and its activity in Russia and abroad has long been the subject of scrutiny from U.S. sanctions enforcers.

Other longtime Putin associates were sanctioned as well, including Transneft CEO Nikolay Tokarev, who served with Putin in the KGB in the 1980s, the EU said. Tokarev assumed control over large state assets in the 2000s as Putin consolidated power, and he benefited from his proximity to Russian authorities, according to the EU. Transneft, a state-controlled oil pipeline firm, is under U.S. debt restrictions; he and the company were listed by Canada.

Gennady Timchenko, a longtime Putin “acquaintance,” is also described by the EU  in the designation as one of his confidants. He has been sanctioned by the U.S. since 2014, and was designated by the U.K. on Feb. 22. Assets linked to him were cited in a financial leak known as the Pandora Papers. Timchenko is founder and shareholder of the investment firm Volga Group and is a shareholder of Bank Rossiya, the EU said.

Alisher Usmanov, also sanctioned on Monday, has been referred to as one of Putin’s favorite oligarchs, according to the EU. He has reportedly fronted for Putin and solved his business problems, the EU said. Citing a leak of U.S. financial regulatory documents called the FinCEN Files, the EU said Usmanov paid USD 6 million to a Putin adviser.

USM Holdings, a company Usmanov held a 49-percent stake in as of 2019, had reshored to Russia to receive a capital amnesty, Kharon reported at the time. USM Holdings also sponsors the English soccer team Everton; it’s unclear how EU sanctions on Usmanov as an individual would affect the club, according to media reports.

And Mikhail Fridman and Petr Aven, business partners who are main shareholders of the Alfa Group, were also both sanctioned by the EU. Putin rewarded Alfa Group’s loyalty to Russian authorities by providing political help for its foreign investment plans, the EU said.

Aven’s friendship with Putin goes back to the early 1990s, he is a close friend of Sechin’s, and he has benefited from his government connections, according to the EU. Aven doesn’t operate independently of Putin’s demands and is one of about 50 wealthy Russian businessmen who regularly meet with Putin in the Kremlin, the EU said. Fridman has been referred to as a top Russian financier and enabler of Putin’s inner circle. The pair engaged in the Kremlin's efforts to lift Western sanctions issued to counter Russian policy against Ukraine, according to the EU.

A statement issued on Fridman and Aven’s behalf cited in media reports said they were committed long-term investors to European businesses. They would contest the sanctions, as the measures were based on “malicious and deliberate falsehoods … the product of historical fantasies and conspiracy theories dreamt up by private individuals with their own agendas.”

The pair on Tuesday resigned from the board of LetterOne, a private equity firm they had co-founded with several other Russian businessmen, according to a report by CNBC.

Fridman, for his part, was the first major Russian businessman to speak out against the  invasion of Ukraine, The Financial Times reported Sunday. A few others with high profiles, including Oleg Deripaska, a businessman under U.S. sanctions, have also since made remarks against the war, exposing a rare chasm between Putin and his most-trusted businessmen. Sanctions on Russia’s elite businessmen won’t stop the war, Fridman told reporters on Tuesday.