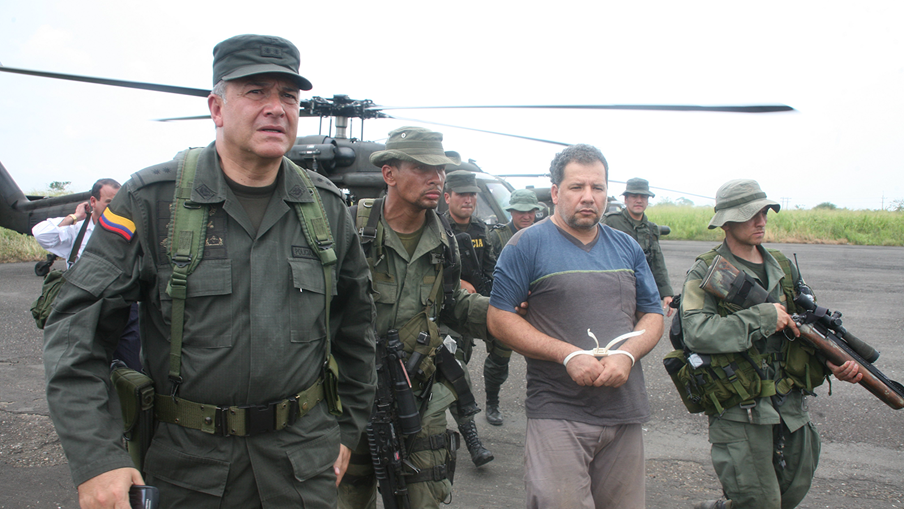 Daniel Rendon Herrera, also known as “Don Mario,” when he was captured by Colombian authorities in 2009. (Source: Colombia National Police)

The former head of a Colombian drug trafficking organization (DTO) pleaded guilty this week to U.S. federal charges accusing him of conspiring to provide support to a foreign terrorist organization (FTO) and engaging in a continuing criminal enterprise, prosecutors said.

Daniel Rendon Herrera, who is also known as “Don Mario,” was the leader of the Autodefensas Unidas de Colombia (AUC), and founder and leader of its successor, Los Urabenos Drug Trafficking Organization, which is also referred to as Clan Usuga and Clan del Golfo.

Once the most feared narco-terrorist in Colombia,  Rendon Herrera pleaded guilty in federal court in Brooklyn, New York, and faces 20 years to life in prison, as well as a forfeiture of USD 45 million and a fine of up to USD 2.25 million, according to prosecutors. As part of his plea, Rendon Herrera accepted responsibility for trafficking nearly 74,000 kilograms of cocaine.

Herrera was named in May 2009 as a foreign narcotics trafficker, and several of his associates were sanctioned in 2010, including a former regional director of the Colombian prosecutor's office in Medellin. After his arrest in 2018 in Colombia, Herrera was extradited to the U.S. to face the charges, and a request for a release at the height of the pandemic was rejected.

The AUC, a Colombian paramilitary and drug-trafficking organization founded in 1997 and designated in 2001 by the U.S. as an FTO, engaged in armed conflict with the guerilla Fuerzas Armadas Revolucionarios de Colombia (FARC). The group was removed in 2014 from the FTO list. AUC had sought to remove FARC sympathizers from power in Colombia, and supported its objectives by engaging in violent attacks such as murder and kidnapping, and imposing “taxes” on cocaine trafficked through areas it controlled, prosecutors said.

Many AUC members demobilized as part of a 2006 peace process, but Rendon Herrera reconstituted the group as Los Urabenos, prosecutors said. Los Urabenos was named by the U.S. in May 2013 as a foreign narcotics trafficker and identified in recent years as a top transnational organized crime threat. Los Urabenos employed “sicarios,” or hitmen, who carried out various acts of violence for myriad purposes, including debt collection, keeping discipline, expanding territory and enhancing the organization’s reputation, according to prosecutors.

When Rendon Herrera was captured in 2009 by Colombian authorities, he had commanded 16 “bloques,” or territories, across the country and thousands of armed paramilitary fighters, prosecutors said. He is also wanted to serve sentences for convictions in Colombia.

More recently, U.S. and regional officials have worked together to tackle the threat posed by Los Urabenos. In late 2020, Colombian authorities conducted raids of a drug trafficking network linked to the organization as the U.S. sanctioned its leader, family members and others.

Multiple Los Urabenos members have been extradited to face U.S. drug trafficking charges, and Panama’s attorney general discussed “significant cases” of its encroachment into his country during a visit in September to Texas, according to a U.S. Justice Department readout.

Last month, Colombia arrested Dairo Antonio Usuga, who had taken over as leader of Los Urabenos, in an operation that involved more than 500 members of Colombia's special forces and 22 helicopters. Also known as “Otoniel,” Usuga was sanctioned by the U.S. in 2010.

"You beat me,” Usuga was quoted as saying to Colombian security forces upon his capture. The Colombian government filed paperwork to extradite him to the U.S., a process that could take weeks to complete, according to a Reuters report.

However, his arrest is not expected to significantly hurt the group, according to an analysis by InSight Crime, which focuses on organized crime groups in the region.

Los Urabenos’ internal structure is designed to maximize adaptability, as well as territory and participation in criminal economies, InSight Crime said, citing the “bloques” model that allows territories to work semi-independently from the organization’s leadership.

There are at least three known commanders with the knowledge and influence needed to take over, and their coffers are secure given criminal economic flows, according to InSight Crime. “If their franchises maintain their loyalty, their criminal network will remain formidable,” it said.