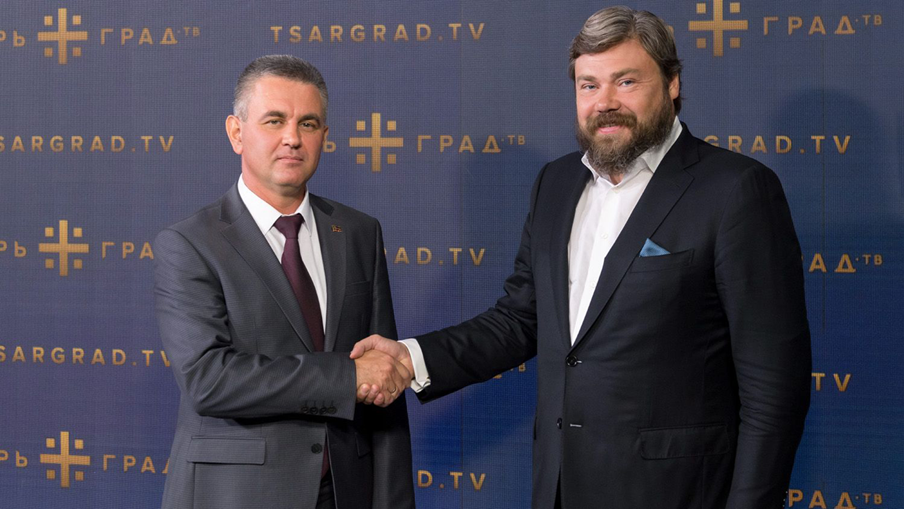 By Nick Grothaus and Robert Kim

Russian Oligarch Konstantin Malofeyev has been sanctioned by the U.S., EU, and Canada since 2014 for providing financial support to Russian-backed separatists in Ukraine. After Russia’s invasion of Ukraine earlier this year, the U.S. and U.K. imposed sanctions on his media company Tsargrad and the think tank Katehon, as well as other related entities.

Tsargrad and Katehon spread propaganda and disinformation in support of the government of Russia, including the false claims that Ukraine is developing a biological weapons program.

Konstantin Malofeyev (also spelled Malofeev) is a Russian businessman who became involved in Russian politics as a leader of monarchist and Russian Orthodox political organizations, backing President Vladimir Putin. In 2014, when Russia annexed Crimea and commenced its support of separatist movements in the Donetsk and Luhansk regions of eastern Ukraine, Malofeyev was a prominent political and financial supporter of Russian proxies in the disputed areas. The U.S., EU, and Canada sanctioned Malofeyev for these actions in 2014, while at the same time the U.S. also designated his investment group, the Marshall Capital Fund.

After the 2014 conflict in Ukraine, Malofeyev started the television channel Tsargrad (Tsar City) and a variety of related organizations. These organizations include Analytical Center Katehon (also spelled Katekhon), a Moscow-based think tank, and the All-Russian Public Organization Society for the Promotion of Russian Historical Development Tsargrad (Tsargrad Society), a political organization.

Tsargrad OOO is the hub of Malofeyev’s network of media and political organizations. The Moscow-based company, founded in 2015, operates Tsargrad TV (Telekanal Tsargrad) and is the parent company of other Malofeyev-affiliated entities, including Katehon.

Tsargrad TV has been engaged in disseminating anti-western propaganda and disinformation, acting as a proxy of the Russian state, according to an August 2020 report by the U.S. State Department. The report described a network of official, proxy, and unattributed communication channels and platforms that Russia uses to create and amplify false narratives, consisting of five main pillars: official government communications, state-funded global messaging, cultivation of proxy sources, weaponization of social media, and cyber-enabled disinformation.

Part of Tsargrad TV’s involvement in this network has been as one of the “permanent partners” of Patriot Media Group, a media consortium launched in October 2019, as Kharon reported previously. The organizer of the Patriot Media Group was the Federal News Agency, an entity that the U.S. sanctioned in December 2018 for its role in the Russian interference campaigns against worldwide political systems and elections.

YouTube blocked Tsargrad TV from its platform in July 2020. Tsargrad responded by suing Google, YouTube’s parent company, in Russia. Tsargrad obtained a 2021 ruling from a Russian court ordering YouTube to unblock Tsargrad’s account or face daily fines. Malofeyev and Tsargrad announced in March of this year that they intend to file lawsuits in the United States and third countries in order to collect from Google the more than 1 billion rubles (over 15 million USD) in fines imposed by the Russian court.

When Russia invaded Ukraine in late February of this year, Tsargrad TV pushed out messaging that was consistent with Russian government propaganda and disinformation. On Facebook, Tsargrad TV posted dozens of messages per day, with messages including:

When in March a federal judge unsealed the indictment of a former Fox News producer for sanctions violations, Malofeyev and Tsargrad TV were central figures in the criminal charges. The producer allegedly violated U.S. sanctions by working for Malofeyev on “multiple television projects over the course of several years”, including Taargrad TV, in Russia, Bulgaria, and Greece. The indictment was the first to allege violations of U.S. sanctions arising from the 2014 conflict in Ukraine, according to the Justice Department’s press release.

Malofeyev himself was revealed on April 6 to be the subject of criminal charges for sanctions violations relating to Tsargrad TV. The Justice Department announced that Malofeyev was charged with conspiracy to violate U.S. sanctions and violations of U.S. sanctions in connection with the hiring of the American news producer. Malofeyev allegedly conspired to illegally transfer a $10 million investment made in a U.S. bank to a business associate in Greece, in violation of the sanctions against him.

Analytical Center Katehon OOO (Analiticheskiy Tsentr Katehon OOO) is a subsidiary of Tsargrad OOO, founded in 2016. The 2020 State Department report describes Katehon as “a Moscow-based think tank that is a proliferator of virulent anti-Western disinformation and propaganda via its website, which is active in five languages. It is led by individuals with clear links to the Russian state and the Russian intelligence services. Within Russia’s broader disinformation and propaganda ecosystem, Katehon plays the role of providing supposedly independent, analytical material aimed largely at European audiences.”

Katehon’s website has not published content in Russian since 2017, though it actively published materials geared towards foreign audiences in English, Spanish, French, German, and Arabic, according to the 2020 State Department report.

One of Katehon’s leading figures is Alexander Dugin, who was sanctioned by the U.S. in 2015 for his role as a leader of a Russian organization supporting separatists in Ukraine. Dugin has also focused his efforts by appealing to fringe conspiracy theorists in the U.S. and other western countries. For example, a paper by Dugin that Katehon published on Facebook on March 22, 2021 emulates the language and concepts of QAnon, calling for “The Great Awakening” and denouncing “The Great Reset” of globalist elites.

Dugin and Katehon have also collaborated with an Iranian organization affiliated with the Islamic Revolutionary Guard Corps - Qods Force named the New Horizon Organization, as Kharon reported in 2019.

Katehon’s website served as a mouthpiece for Malofeyev’s February 24 manifesto on Russia’s invasion of Ukraine, declaring the actions  to be of an operation to end genocide of Russians in Ukraine.

The U.S. and U.K. Sanctions Designations

The U.S. Treasury Department designated Tsargrad OOO, the Tsargrad Society, and Katehon as part of its sanctioning of more than 40 individuals and entities in Malofeyev’s global sanctions evasion network and “malign influence ecosystem” on April 20 of this year. HM Treasury also designated Tsargrad OOO, Katehon, and the Tsargrad Society on May 4, along with 60 other individuals and entities.

The U.S. and U.K. designations escalated the use of sanctions authorities to combat Russian propaganda and disinformation, and further actions against Russian media entities are in progress. The President of the European Union announced on May 4 that the EU’s sixth package of sanctions would ban three Russian state-owned broadcasters from distributing content in the EU in any shape or form, and the U.S. designated three Russian state-owned television stations on May 8.