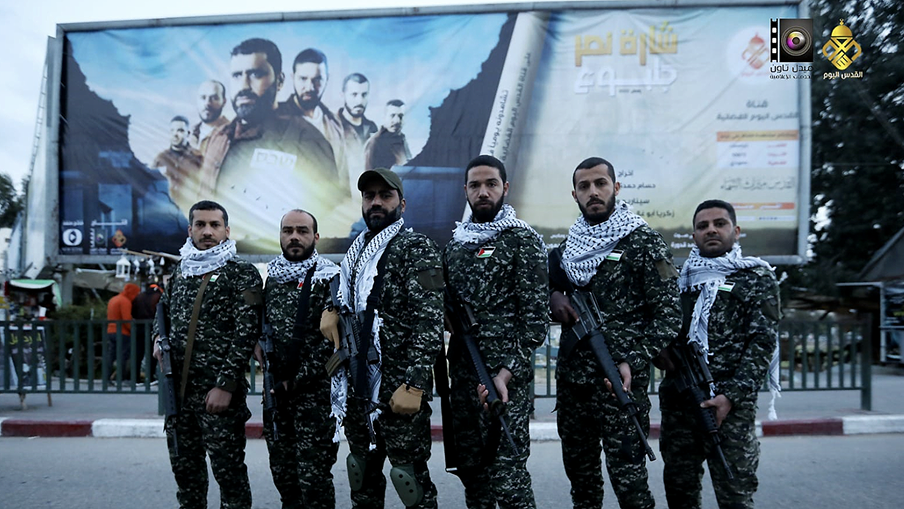 By Rana Armanous and Robert Kim

This April, Hamas and the Palestinian Islamic Jihad (PIJ) returned to TV and computer screens with dramatic Ramadan programming. In separate multi-part series, the shows aim to whip up support for the sanctioned terrorist groups with scenes of daring prison breaks and murder of Israeli citizens.

The series were produced by Al-Aqsa TV (Hamas) and Al Quds Today TV (PIJ), and posted on Facebook and YouTube.

These series continue and expand the use of television programs broadcast during the month of Ramadan to promote violence and glorify terrorist tactics against Israel, following the 2021 Ramadan airing of the series “Milad Al Fajr” (“The Birth of Dawn”) by Al Quds Today TV and PIJ.

To reach a broad range of audiences, the terrorist affiliated media outlets continued to utilize social media to promote and air episodes of these programs. Social media companies must be alert to the use of their platforms to spread content from sanctioned violent extremist groups and their media outlets.

In a 24-episode series produced by the PIJ-affiliated Al-Quds Today TV, “Shara Nasr Gilboa” (“Gilboa Victory Sign”) depicts the tunnel escape of six Hamas and PIJ militants from the Israeli Gilboa Prison in September 2021. In several episodes seen by Kharon, the series likens the tunnels used for the prisoners’ escape to the networks of underground tunnels used by Hamas in Gaza to store weapons, move weapons and militants, and carry out attacks inside Israeli territory.

PIJ was designated in 1997 by the U.S. Department of State as a foreign terrorist organization, and the European Union, U.K., and Canada have also imposed sanctions on PIJ since the early 2000s.

Freedom by “the Fist”

“Qabdat Al-Ahrar,” or “The Fist of Freemen,” is a 30-episode Hamas broadcasted series centered around the November 2018 clashes in Gaza between Hamas and Israel. More than the PIJ program, the Qabdat al-Ahrar series was a clear attempt to influence popular opinion in favor of Hamas leadership both in Gaza and abroad.  Hamas-media promoted the series, highlighting “the valor of the resistance in confronting the occupation forces and the role of the resistance leadership abroad in the military and financial supply of the resistance.”

The producer of the “Qabdat al-Ahrar” series is Al-Aqsa TV, a television station that the U.S. Department of the Treasury designated in March 2010 for being financed and controlled by Hamas. The U.S. government condemned Al-Aqsa TV for airing “programs and music videos designed to recruit children to become Hamas armed fighters and suicide bombers upon reaching adulthood.”

In addition to Al Aqsa TV, the Qabdat Al-Ahrar series aired in Lebanon via the Hizballah-controlled Al Manar TV, and on other television networks in Algeria and Jordan, as well as an Arabic language outlet in Turkey.

To ensure that supporters across the globe could watch its Ramadan series, the production company behind the series posted entire episodes of “Shara Nasr Gilboa” on its YouTube channel and its Facebook page, which remained active as of the date of this publication.

“Qabdat Al-Ahrar” has not been officially distributed through social media by the production companies, but followers of the series posted entire episodes on personal social media accounts.

TikTok posts of clips from “Shara Nasr Gilboa” and “Qabdat Al-Ahrar” have been numerous.

Social media platforms should be attentive to possible violations of their policies against violent extremist content in the posting of such programming, and the need for ongoing vigilance in finding and blocking such content. YouTube took down an episode of “Shara Nasr Gilboa,” based on media reports and a placeholder video from Middle Town Media.

Episode 4 featured the execution of an Israeli civilian, and YouTube blocked the episode on Middle Town Media’s channel. However, Middle Town Media announced in its placeholder video that viewers could access the episode through an alternative link to an external website, demonstrating the risk that violent extremist content can be reposted, or moved outside the platform while using the platform for publicity.