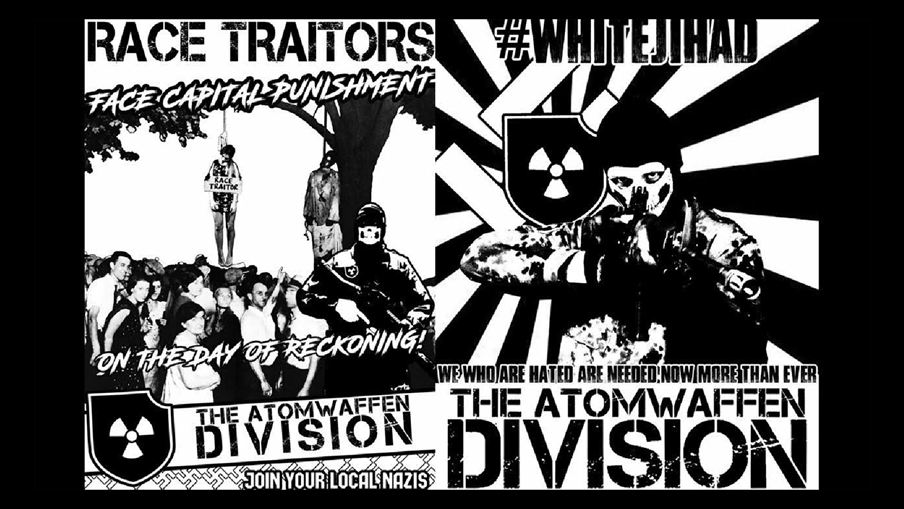 Images posted by Atomwaffen Division on Telegram in 2020. (Source: Telegram)

By Samuel Rubenfeld and Zach Caldwell

The U.K. Home Secretary on Monday moved to proscribe the Atomwaffen Division, a neo-Nazi group predominately in the U.S., as a terrorist organization and make membership in it illegal in the U.K.

Under the proposal, membership or inviting support in the group would be a criminal offense punishable by up to 10 years in prison. A new law that will shortly receive Royal Assent would lengthen the sentence to 14 years, according to a U.K. press release. Once approved by parliament, the listing of Atomwaffen Division is expected to come into effect later this week.

Atomwaffen Division, which seeks a race war to bring about a fascist, white ethno-state, formally disbanded in March 2020, but months later, the National Socialist Order (NSO) announced itself as the group’s successor, according to a post on Telegram. The U.K. named NSO as an alias; Atomwaffen Division was listed by Canada in February as a terrorist entity.

“Vile and racist white supremacist groups like this exist to spread hate, sow division and advocate the use of violence to further their sick ideologies,” said Home Secretary Priti Patel.

Atomwaffen Division had recruited inside the U.S. military, PBS Frontline reported in a 2018 documentary. In September 2020, the group, as NSO, resurfaced in Colorado Springs, Colorado, placing stickers containing images of Adolf Hitler, a swastika and a recruitment email on the windows of local businesses, according to a local media report.

Right-wing extremist groups such as Atomwaffen Division have adapted their use of online tools over time as they face government crackdowns, Kharon reported last year.

Atomwaffen Division has inspired other groups abroad, including the Feuerkrieg Division, which the U.K. listed in July 2020 as a terrorist organization, the U.K. government statement said. The group was aligned with the Sonnenkrieg Division, another U.K.-listed right wing extremist group, according to a U.S. congressional resolution calling to ban the group. A number of U.K. terror prosecutions cited Atomwaffen Division’s influence on teenagers, the BBC reported.

The group’s relaunch announcement as NSO was carried by neo-fascist publication The American Futurist, which earlier this month also published NSO’s translation of “Why We Fight,” a Third Reich manifesto from the Nazi era “just as relevant today as it was back then.”

This week, The American Futurist updated its donation page, providing language on how to obtain monero, a type of virtual currency, and donate it to the publication, according to a post on Gab, a right-wing social media network. The publication has decided to stop accepting funds in currencies other than monero due to privacy concerns, the donation page says.

Several high-level members of Atomwaffen Division have been prosecuted in the U.S. Brandon Clint Russell, a co-founder, was sentenced in January 2021 to five years in prison for possessing an unregistered destructive device and unlawful storage of explosive material. Russell’s writings from prison have been published by The American Futurist, where he is listed as a staffer.

Cameron Shea, a leader of Atomwaffen Division, pleaded guilty earlier this month to federal conspiracy and hate crime charges for threatening journalists and advocates who worked to expose anti-Semitism. Two co-defendants, including Johnny Ramon Garza, have pleaded guilty and been sentenced; a fourth pleaded not guilty and is awaiting trial, prosecutors said.

John Cameron Denton, a former Atomwaffen leader, pleaded guilty in July 2020 to his role in a conspiracy conducting “swatting” events targeting journalists, a harassment tactic involving the deception of emergency dispatchers who are sent under the belief of imminent danger. His sentencing is scheduled for next month, according to the court docket; prosecutors are seeking a five-year prison sentence, court records show.