A Mammut Industrial truck seen driving along a highway in Iran. (Source: Shutterstock)

The company and two of its owners, brothers Behzad Daniel Ferdows and Mehrzad Manuel Ferdows, were sanctioned in September 2020 when the Treasury said the firm had provided support to an entity in Iran’s ballistic missile program. The Ferdows brothers, and Mohammad Reza Dezfulian, who was sanctioned as the managing director of the subsidiary, were delisted by the U.S. in July.

The delistings don’t reflect any change in U.S. government sanctions policy toward Iran, nor do they have anything to do with efforts to negotiate a re-entry into the nuclear agreement, a spokeswoman for the Treasury said in an email to Kharon.

“The United States will continue to counter Iran’s destabilizing activities, including through implementation of our sanctions,” she said.

Erich Ferrari, who represented the companies and the Ferdows brothers in litigation filed last year, said on social media that he was happy for the delisting of his clients. “This is not a political action, it’s one that followed established legal processes,” he said.

Mammut Industrial owned 20 firms based in Iran, and its network has an international presence with trading companies in Germany, Kuwait and across Africa, Kharon reported in October 2020. The Ferdows family patriarch, Behrouz Ferdows, had been described in Iranian media as the “godfather of car imports,” and the corporate empire went beyond automobiles into the shipping, construction, technology, transportation and telecommunications sectors, Kharon found.

No one with the Ferdows last name serves any longer on the board or as managing director of Mammut Industrial, according to a review by Kharon of the most recent corporate records available.

In the lawsuit filed last November, Mammut Industrial said the Treasury had caused the company “irreparable harm by destroying its reputation” and “forcing” the firm out of “legitimate business.” The U.S. hadn’t provided reasoning, beyond a press release and a government notice, for its conclusion that the company had provided support to Shahid Hemmat Industrial Group (SHIG), Iran’s primary developer of liquid propelled missiles, the lawsuit said.

SHIG is sanctioned by the U.S., U.K., United Nations and European Union.

A separate lawsuit filed by the Ferdows brothers said the designations had shattered their livelihoods and reputations “without lawful cause,” rendering them as “international pariahs,” as transactions anywhere in the world would expose the counterparty to U.S. sanctions. Each brother owned an apartment in Los Angeles; Mehrzad Ferdows couldn’t collect rental income, and both faced a risk of foreclosure because they couldn’t make payments, the lawsuit said.

Both lawsuits were dismissed in May, however, after signals toward an out-of-court resolution of the matter.

Alexis Nicholson contributed to this report. 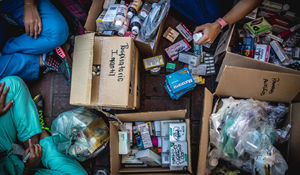