As much as 70 percent of the food program’s funds have been lost, the U.S. has said 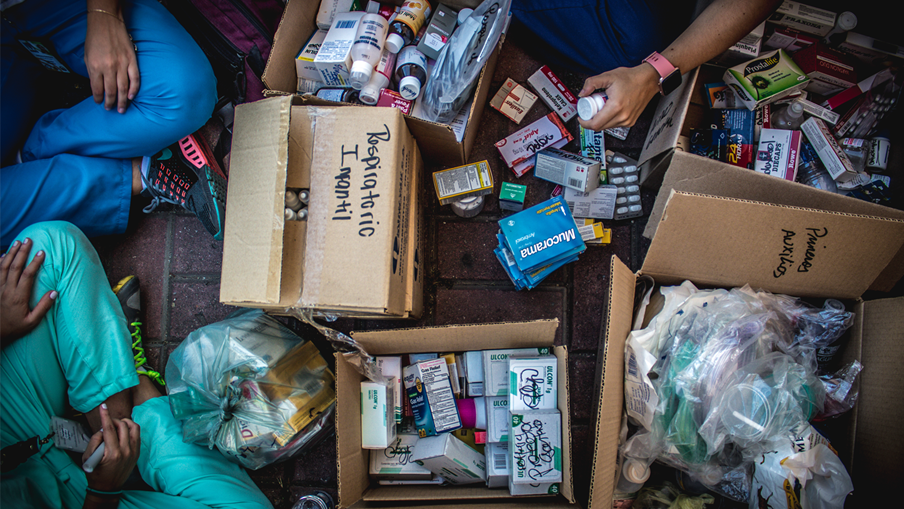 By Samuel Rubenfeld and Kortney Casanova

A former Venezuelan governor, a Colombian businessman, his son and two others were charged in an indictment unsealed Thursday accusing them of laundering the proceeds of contracts to provide food and medicine to Venezuela they had obtained through bribery.

The case centers around Venezuela’s scandal-ridden food aid program, Comité Local de Abastecimiento y Producción, or CLAP, prosecutors said. Created in 2016 by Venezuelan leader Nicolas Maduro, the CLAP program provided subsidized food boxes to the poor that typically contained basic staples such as rice, pasta, powdered milk and canned tuna. But as much as 70 percent of its funds were lost to corruption, the U.S. Treasury Department has said.

CLAP has been the subject of media interest for several years, and it soon became a centerpiece of U.S. policy concern on Venezuela. The U.S. sanctioned CLAP Director Freddy Bernal in November 2017 over his role in the corruption of Venezuelan government-run food programs. Mexico and Colombia have also conducted criminal probes of the program. And Maduro enlisted a “digital militia” under CLAP to amplify his message, Kharon reported in 2019.

Colombian businessman Alvaro Pulido Vargas, his son Emmanuel Enrique Rubio Gonzalez and the others obtained Venezuelan government contracts to import and distribute aid through CLAP by paying bribes to officials, including former Venezuelan governor Jose Gregorio Vielma-Mora, according to the indictment. They allegedly received about USD 1.6 billion from Venezuela and transferred about USD 180 million directly to the U.S. or through correspondent bank accounts located in the U.S., prosecutors said.

The scheme began in 2015 but it took shape in early or mid-2016, the indictment said, as Vielma-Mora took relevant meetings, and a business plan was made and set into motion.

Though Vielma-Mora knew the actual cost of importing the food boxes, he allowed them to be purchased at an inflated price so the co-conspirators could use the additional funds to bribe him and other Venezuelan officials, according to the indictment. Between December 2016 and April 2018, Vielma-Mora and an unnamed co-conspirator received about USD 17.3 million in bribes and corrupt funds in exchange for his help awarding contracts, the indictment said.

Pulido and his son were sanctioned by the U.S. in July 2019 along with Alex Saab, a Colombian businessman extradited in the past week to face charges in Miami in a separate corruption case involving Venezuelan government contracts. Saab had exploited his ties to Maduro since at least 2009, the Treasury said at the time. The U.S. sanctions on Saab and Pulido’s business networks were tightened in September 2019, and the U.K. designated the men this summer.

On Friday, the U.S. State Department announced a reward offer of up to USD 10 million for information that leads to Pulido’s arrest or conviction, saying the move complemented the indictment announced this week by prosecutors.

Saab and Pulido were business partners, and they were involved with the CLAP program as early as 2016, when they developed a plan to acquire food from a foreign distributor, assemble the boxes abroad and ship them to Venezuela, the Treasury said when imposing sanctions.

Pulido and his son were responsible for buying the food in Mexico, putting together the boxes and exporting them from Mexico to Venezuela, according to the indictment. Carlos Rolando Lizcano Manrique, another Colombian man charged in the case, was responsible for receiving and distributing the CLAP boxes within the Venezuelan state of Tachira, the indictment said.

The indictment appears to identify Saab as an unnamed co-conspirator, which a person familiar with the matter confirmed Thursday to the Associated Press.

Ana Guillermo Luis, who is charged in the indictment as working for Pulido and a co-conspirator, allegedly helped create a web of dozens of companies and associated bank accounts in various countries to receive and move the money received as payment for the corruptly obtained contracts. She helped another co-conspirator open bank accounts that were used as an intermediary for the bribes to Vielma-Mora, and created companies and associated bank accounts so others could receive their share of the ill-gotten gains, the indictment said.

Group Grand Limited, a company owned and controlled by Pulido and Saab, and sanctioned in July 2019, obtained contracts with COBISERTA and Coporaciôn Venezolana de Comercio Exterior (CORPOVEX), a Venezuelan state-controlled entity in charge of imports and exports, according to the indictment. The contracts, awarded in 2016 and 2017 and worth at least USD 855.8 million, were to import and distribute food and medicine in Venezuela through the CLAP program, the indictment said.

The network supplied poor or low-quality food, U.S. and Mexican officials have said, and a study by the Central University of Venezuela found that powdered milk shipped in 2017 and 2018 was low in calcium and protein, and high in carbohydrates and sodium. Companies in the CLAP supply network had frequently used networks of middlemen, including firms incorporated in multiple jurisdictions with similar names, according to the Treasury.

In 2017 and into 2018, the defendants and their co-conspirators received hundreds of millions of dollars and euros as payment through Venezuelan state-owned entities, including an economic development bank sanctioned by the U.S., the indictment said. The funds were sent to bank accounts held around the world in the name of Group Grand and Asasi Food, another firm linked to Saab and Pulido, and under U.S. sanctions, according to the indictment.

Group Grand and Asasi Foods transferred at least USD 10 million into bank accounts in the U.S., more than half of which into Florida, the indictment said.

Over the course of the alleged conspiracy, Pulido and an unnamed conspirator also transferred more than USD 170 million through correspondent banks in the U.S. to accounts used by co-conspirators, suppliers, transportation companies and others, according to the indictment. Group Grand and Asasi Foods also moved at least USD 22 million to a freight-forwarding and shipping company in Mexico, and USD 50 million to a Mexican food company, to pay for costs associated with filling the contracts for the CLAP program, the indictment said.

Venezuela’s ability to pay foreign companies was limited due to a U.S. dollar shortage during the course of the conspiracy, so Pulido and a co-conspirator refined and sold gold on behalf of the country, according to the indictment. The U.S. sanctioned a Venezuelan state-run ferrous metals firm in March 2019. The effort helped Venezuela obtain additional currency to make payments to companies, including Group Grand and Asasi Foods, the indictment said.