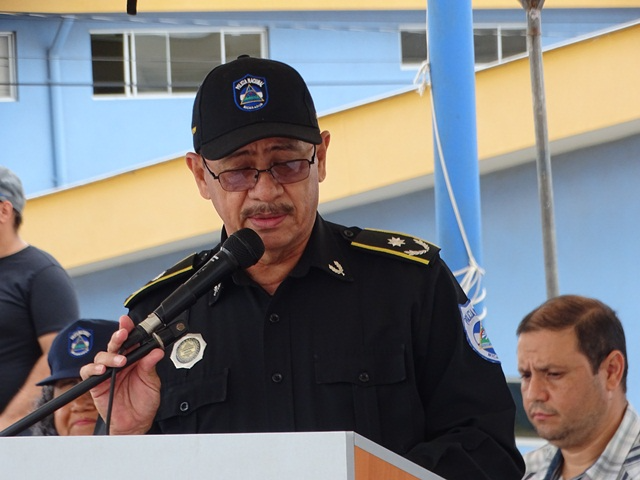 The U.S. Treasury Department on Thursday sanctioned the Nicaraguan National Police (NNP) and three NNP commissioners for their role in human rights abuses in Nicaragua.

The NNP used live ammunition against peaceful protesters and participated in death squads, and it carried out extrajudicial killings, disappearances and kidnappings, the Treasury said.

“The Ortega regime has utilized the [NNP] as a tool in its campaign of violent repression against the Nicaraguan people,” said Secretary Steven T. Mnuchin, referring to the government of Nicaraguan President Daniel Ortega.

Alongside the designations, the Treasury also on Thursday issued a license authorizing wind-down transactions with the NNP until May 6 and a license allowing official government business between the U.S. and Nicaragua.

The U.S. has focused on human rights abuses in Nicaragua in recent years, imposing sanctions on government officials and other NNP leaders, including Deputy Director General Ramon Antonio Avellan Medal in November 2019 and Director General Francisco Javier Diaz Madriz in July 2018. Two of Ortega’s sons, Rafael and Laureano, are also sanctioned, as is Vice President Rosario Murillo, over their roles in Nicaraguan corruption.

Nicaragua’s parliament in February approved the creation of four state firms that will handle import, storage, distribution and sales of oil and gas after the U.S. sanctioned companies controlled by Rafael Ortega, according to an Associated Press report from the time. The country had nationalized Distribuidor Nicaraguense de Petroleo, S.A. (DNP), a chain of gas stations controlled by Rafael Ortega, days after the designation.

The ongoing human rights crisis in Nicaragua continues unabated, Michele Bachelet, the United Nations human rights leader, said last week in a statement. The U.N. should continue its monitoring of the situation, human rights organizations said Wednesday in a letter to the U.N.

Since the start of political unrest in 2018, the NNP and parapolice have conducted kidnappings and targeted executions of opposition leaders, the Treasury said.

The NNP and parapolice, a volunteer paramilitary group often comprised of plain clothed NNP officers, conducted “Operation Clean Up” in July 2018 to crack down on protesters and dismantle road barricades, resulting in nearly 100 deaths, according to the Treasury.

Justo Pastor Urbina, commissioner of the NNP special operations division, continues to play a central role in the repression across the country, the Treasury said.

Juan Valle Valle, chief of the NNP department of surveillance and patrolling, was responsible for directing the harassment of individuals sheltered in a Managua shopping center, the Treasury said. Demonstrators used the entrance of the shopping center as a venue for their latest protest, but quickly took shelter inside storefronts after assailants, some of them on motorcycle, began beating demonstrators, according to a report by GIEI.

Luis Alberto Perez Olivas, chief of the NNP judicial assistance directorate, is also the director of the El Chipote prison. The prison is known for abusive practices, including allegations lodged by human rights organizations of torture, rape, electrocution, strangulation, laceration with barbed wire and beating with steel tubes, according to the Treasury.

A demonstrator held at the prison said masked men hanged him from the ceiling and beat him with baseball bats, tubes and guns for two days, and was then taken to a masked man who he recognized by voice and build as Olivas, who forced him to film a confession implicating other protesters, according to the Treasury.

“This latest action is further proof of the United States’ unwavering commitment to use all economic and diplomatic tools to promote accountability for those who play a role in serious human rights abuses and seek to silence pro-democracy voices in Nicaragua,” said Secretary of State Mike Pompeo.