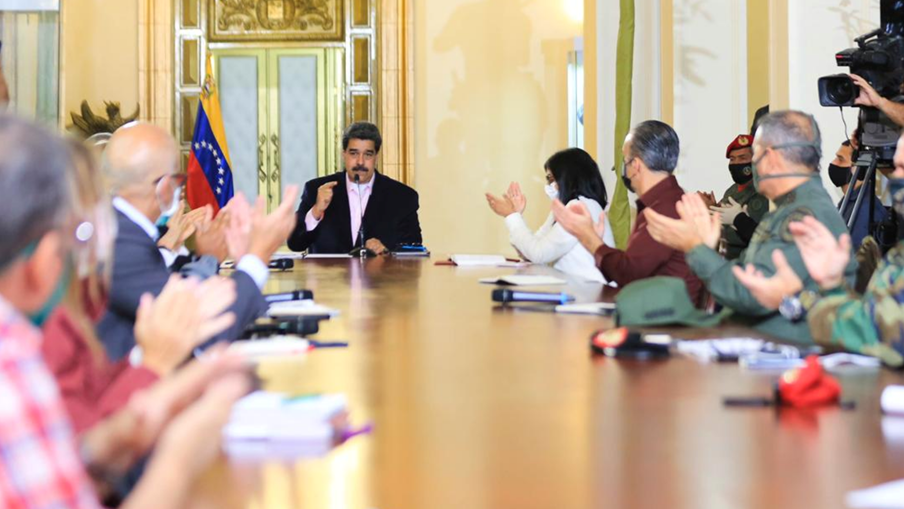 U.S. prosecutors announced narco-terrorism and other charges against Nicolas Maduro and several top Venezuelan officials, marking the latest major escalation in Washington’s effort to push him and his inner circle from power in Caracas.

Though the U.S. and more than 50 other countries haven’t recognized Maduro as Venezuela’s president since early 2019, he remains firmly in control, with prosecutors calling him “the de facto ruler of the country” in court records. Maduro, whom the U.S. sanctioned in 2017, helped manage and ultimately lead a Venezuelan drug trafficking organization (DTO) as he gained power, working for decades with the Revolutionary Armed Forces of Colombia (FARC), a leftist Colombian guerilla group designated in 1997 as a foreign terrorist organization (FTO), prosecutors said.

“For more than 20 years, Maduro and a number of high-ranking colleagues allegedly conspired with the FARC, causing tons of cocaine to enter and devastate American communities,” U.S. Attorney General William Barr said in a statement.

In addition to the criminal charges against Maduro and more than a dozen others, which were announced in federal courts in New York, Florida and Washington, D.C., the U.S. State Department offered a series of rewards, including up to USD 15 million for information leading to Maduro’s arrest or conviction.

“While holding key positions in the Maduro regime, these individuals violated the public trust by facilitating shipments of narcotics from Venezuela,” said Secretary of State Mike Pompeo.

The latest U.S. actions come as Caracas braces for a wave of coronavirus cases with one of the world’s most vulnerable health systems. U.N. Secretary General Antonio Guterres this week called for the removal of sanctions on countries, including Venezuela, to ensure access to food and medical supplies amid the pandemic. The Maduro administration has confirmed 107 cases as of Thursday.

Venezuelan Foreign Minister Jorge Arreaza posted a government statement on social media saying Caracas denounces the latest charges, and that they come as humanity faces “the fiercest of pandemics.” “Donald Trump’s government is again attacking the people of Venezuela and its democratic institutions, based on miserable and false accusations,” the statement said.

The U.S. has sanctioned them all, other than Hernandez Solarte, who has been in and out of custody in the time since a 2018 U.S.-led raid, according to media reports. An arrest warrant for him was issued by Colombian authorities in July 2019.

Hernandez Solarte, whom the U.S. characterized as a fugitive in the indictment, has given recent interviews, including one in February with English-language leftist media outlet Venezuelanalysis.com about the August 2019 breaking of a peace agreement struck a few years earlier by FARC and the Colombian government. “When the state broke the agreement – despite our efforts to keep it alive – we had no choice but to resume armed struggle,” he said.

Since at least 1999, Maduro, Cabello Rondon, Carvajal Barrios and Alcala Cordones were leaders and managers of the Cartel de Los Soles, or “Cartel of the Suns,” a name referring to the sun insignias affixed to the uniforms of high-ranking Venezuelan military officials, prosecutors said. In addition to corrupting Venezuela’s legitimate institutions, the cartel sought to enrich its members and enhance their power, and to “flood” the U.S. with cocaine, prosecutors said.

Around that time, FARC leaders agreed with the Venezuelan cartel to relocate some of its operations over the border to Venezuela, thereafter dispatching processed cocaine from Venezuela to the U.S. via transshipment points in the Caribbean and Central America, according to prosecutors. By 2004, the State Department estimated that 250 or more tons of cocaine were transiting Venezuela per year, prosecutors said.

Maduro, according to U.S. prosecutors, negotiated multi-ton shipments of FARC-produced cocaine; directed the cartel to provide FARC with military-grade weapons; coordinated foreign affairs to facilitate large-scale drug trafficking; and solicited help from FARC leaders to train a militia group that functioned, in essence, as an armed forces unit for the Venezuelan cartel.