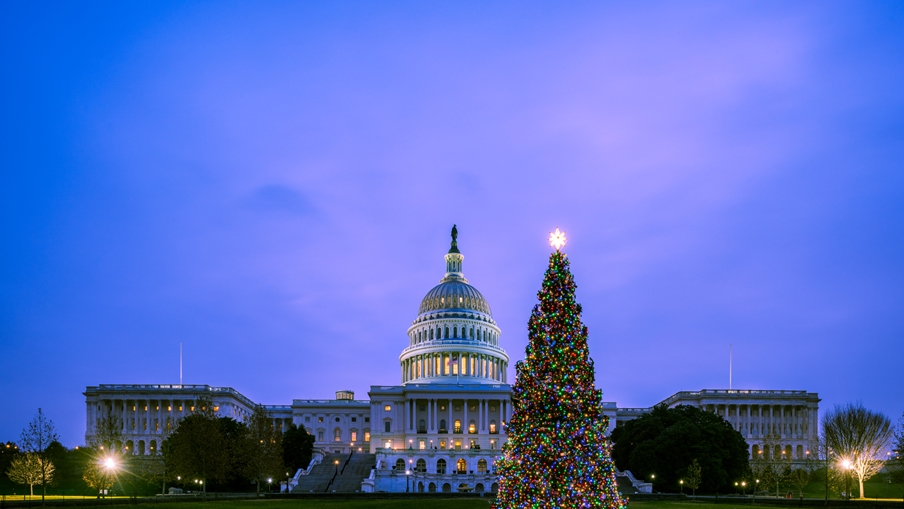 (Photo: Architect of the Capitol)

The omnibus law includes sanctions on companies involved in the production of a Russia-to-Europe gas pipeline, additional measures on those interacting with the Syrian government, expanded authorities against North Korea, and limitations on removing Huawei Technologies Co. Ltd. from a U.S. export-control list, among others. Many provisions also require additional reporting to Congress by executive agencies.

The Trump administration said in a lengthy statement alongside the president’s  signature that it will treat some of the sanctions-related provisions “consistent with the President’s exclusive constitutional authorities...as the sole representative of the Nation in foreign affairs,” without further explanation.

The law imposed sanctions on companies involved in laying pipe for Nord Stream 2, a gas pipeline stretching from Russia to Germany that has faced obstacles, Kharon previously reported. Russian officials vowed to continue construction despite the U.S. sanctions and have threatened retaliation. Germany’s foreign minister said the country “firmly rejects” the sanctions but wouldn’t act against them.

The law led to a work stoppage on Nord Stream 2, its operator confirmed over the weekend. The pipeline had gained approval in October to pass through Danish waters.

Nord Stream 2 AG, the Swiss company building the pipeline, said it will “work on finishing the pipeline as soon as possible,” according to a Reuters report. Russian Prime Minister Dmitry Medvedev said Monday that the project would be completed within a couple of months.

To receive U.S. authorization for a wind-down transaction for firms exiting the project, the parties involved must immediately cease construction-related activity, the U.S. Treasury Department said late Friday in guidance. The Treasury also said exceptions may be made for the safety of the pipeline and care of the crew, as well as maintenance to avoid environmental or other significant damage, according to the guidance.

The provision pertaining to Syria was named the “Caesar Act” for a defector military photographer who smuggled thousands of pictures out of the country to document the brutality of the Syrian government. It authorized sanctions on a foreign person providing support to, or engaging in a significant transaction with, the Syrian government, as well as its contractors and anyone sanctioned for dealings with Syria.

It also requires the Treasury to determine within 180 days whether reasonable grounds exist for concluding whether the Central Bank of Syria is a “financial institution of primary money laundering concern” under the Patriot Act. The central bank has been blocked under U.S. sanctions since May 2012 as an instrumentality of the Syrian government.

The law also authorizes sanctions against a foreign person involved in various business dealings with Syrian economic sectors, including the provision of technology for the country’s natural gas production; sales or transfers of aircraft or aircraft parts for Syrian military purposes, and construction or engineering services for the Syrian government. Congress also required the administration to submit a strategy to deter foreigners from entering into contracts for Syrian reconstruction in areas controlled by Syria, Russia or Iran.

Secretary of State Mike Pompeo welcomed the passage of the provision in a late Friday statement, saying it gives the U.S. “tools to help end the horrific and ongoing conflict in Syria.”

The law added new sanctions authorities on North Korea days ahead of a promised “Christmas gift” from Pyongyang to the U.S.; diplomacy between the U.S. and North Korea has ebbed and flowed during the Trump administration. It’s unclear what the so-called gift will be, but experts predict it could either be a hardening of North Korean policy toward the U.S. or the test of an intercontinental ballistic missile (ICBM) capable of reaching U.S. soil.

Among the expanded measures is a secondary-sanctions authority, allowing designations of foreign financial institutions for providing services to anyone sanctioned for ties to North Korea, and additional mandatory designations for aiding in the export of North Korean coal, textiles, seafood, iron or refined petroleum products.

The law requires a series of reports on Chinese influence operations, Beijing’s repression of Uighurs and efforts by Chinese actors to supply synthetic opioids in the U.S., all of which have recently been areas of focus of U.S. sanctions policy.

It also called for the U.S. to stand with Hong Kong, including through potential designations and travel restrictions on senior Chinese leaders. Beijing slammed the law, saying it interferes with the country’s internal politics.

Under the law, the Secretary of Commerce cannot remove Huawei Technologies or any of its affiliates from the Bureau of Industry and Security (BIS) Entity List unless the secretary certifies that the company has met a number of conditions, including the settlement of charges that the company violated sanctions.

Huawei, the Chinese networking equipment and mobile-phone giant, was added in May to the BIS Entity List, along with dozens of affiliates. More affiliates were added in August. The company has a license until February, however, to receive certain, exempted U.S. products.

The Commerce Department is required under the defense policy law to submit a report in 60 days, and annually thereafter, to Congress about the licenses issued for exports to Huawei, including the items authorized, their end uses, the identities of any recipients and the underlying reasons for approval.

The U.S. listing has had a “very limited” effect on the company, the Huawei chairperson said in October. Earlier this month, he told AFP that the company is working on a plan to build its own components at a site in Europe, citing an ongoing feasibility study that will determine the country. Though there’s no timetable, “it could happen very quickly,” he said to AFP.

Analysts from the Asia, Eurasia, Iran, Latin America and Counterterrorism and Middle East teams contributed to this report.